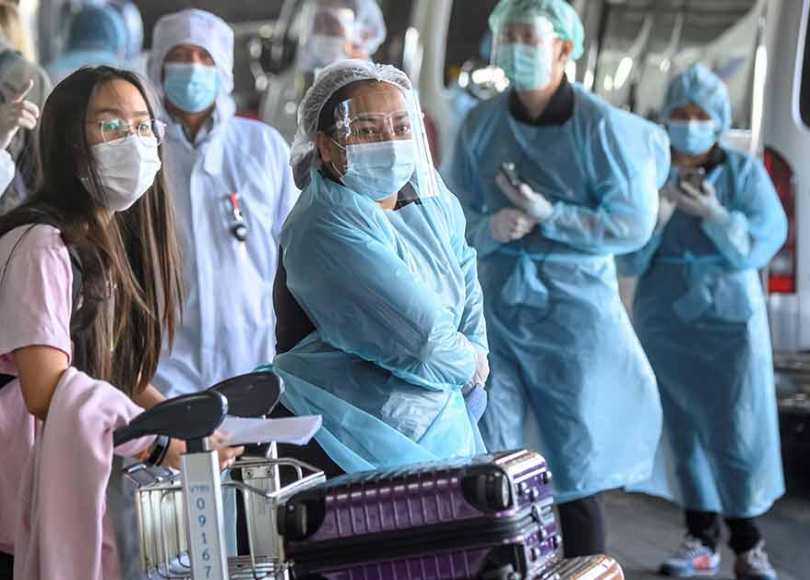 I arrived in Thailand from Qatar on a flight barely 20% full. The word is out that Thailand is not ready for tourism. The exception is that tourists are now, if they meet certain entrance criteria, submit to regular testing and adhere to restrictions, allowed to enter several prime destinations such as Phuket, Ko Samui and Hat Yai without quarantine. That the Thai government would carve out exceptions to the stringent rules now applied to all other locations is testimony to either opportunism and a need for cash or careless inconsistency in applying prudent public health measures.

As we somewhat bedraggled passengers ambled in the early morning through a series of moving walkways down a long empty corridor and past entirely empty departure gates, we encountered cones and taped-off areas directing us toward a public health screening station on the way to immigration. We were met by a swarm of nurses and other functionaries, fully gowned with protective gear including shields, caps and gloves, who lined us up in appropriately spaced rows of chairs to await an interview and document inspection.  Everyone was ready with their Certificate of Entry, already provided multiple times to airline authorities as we boarded our connecting flights, our proof of hotel booking in one of the state sponsored quarantine facilities, proof of travel health insurance should we require any treatment or hospitalization, our proof of vaccination, passports and two other documents now required to enter Thailand.

We were grilled about symptoms as the nurses filled out pink forms to include in our handful of papers as we were processed and checked out and allowed to progress toward the usual immigration inspection and baggage claim, another 300 meters away. We encountered no other passengers, no open businesses, no other airport employees other than uniformed medical or police personnel. Under normal circumstances, Suvarnabhumi airport is one of the busiest in the world. Now it’s mostly silent and desolate.

Having entered or departed Thailand perhaps a dozen times in the past six years, this immigration experience was the most unusual I’ve ever encountered. Immediately inside the immigration control area, we were directed toward a long desk with a glass barrier where a dozen immigration officers sat six feet apart. We passed all our documents through the barrier for them to examine, presumably to verify that we just went through health screening. Our documents were compared to an online database which I suspect already had our travel information recorded. This encounter lasted about 5 minutes as documents were inspected and stamped.

From there we proceeded to the regular immigration screening normally encountered upon entry. An officer examined the visa and all documents again. Oddly, this uniformed officer was not gowned, capped or gloved. Strictly the regular uniform. All documents were photographed and stamped again. From there we go to baggage claim, which normally occurs at one of a dozen large carousels in a cavernous transition area as big as a football field. But now there is only one carousel operating and the rest of the floor is off-limits.

I grabbed my bag and headed through customs and into the arrival area, all deathly quiet and empty except for a small group of hotel drivers holding the usual signs. I was met by someone—again, fully garbed in protective gear–with a clipboard which had my name on it and the hotel where I’d be staying. She quickly herded me to the check-out desk where I was met by an escort who carried my luggage out to the hotel vehicle and driver. Altogether, between the aircraft and the shuttle vehicle, I had now encountered no less than seven different personnel in protective gear and one immigration officer in uniform. Inspection of documents had been repeated four times.

The hotel shuttle had been outfitted with a glass barrier between me in the back seat and the driver up front. My compartment included an air filter and no air passed between the front and back. Check-in at the hotel included an interview with a nurse from a local hospital and the normal check-in process with a hotel employee, except this encounter included a review of quarantine policies and procedures in a 12-page document in English and Thai, an opportunity to enroll in a local telephone plan and instructions how to order meals to be brought to my room. Leaving the room for any reason is prohibited.

There is a schedule for multiple daily temperature readings to be reported by telephone app, a schedule for multiple PCR tests during my stay, instructions for laundry and trash, supplies of disinfectant, soap, bottled water, linens, and other essentials—like coffee–for the duration of my stay. There is no other access to any of the hotel facilities whatsoever. The only time you leave your room is to be tested.

One might assume from these encounters that Thailand is managing COVID well. But let not the extremity of it all be deceiving. Thailand is struggling mightily, with case rates and deaths climbing to new highs. More deaths are happening at home and are likely not being counted accurately. The military government led by Prayut Chan-O-Cha backed itself into a corner by its hubris and conflicts of interest, believing their salutary response to the initial wave was sufficient and not ordering nearly enough vaccine when they had the chance. They were then saddled with an exclusive contract with a vaccine manufacturer with no experience and coddling certain interested parties by steering income in their direction.

Then they tried to recover by buying Sinovac, which proved itself not up to the task and which, whether justified or not, then ignited mass refusal to accept it—to which the government announced a plan to combine two different vaccines by adding a shot of Astra Zeneca on top of Sinovac. Otherwise, the strategy seems to be to withdraw into an opaque silence in hopes that things will eventually calm down. Meanwhile, the economy tanks and the threat of more COVID from out-of-control Myanmar rises.

Thailand is not smiling now. Suicide rates are unusually high, as is violent crime, petty theft, mass fear and economic desperation. Hospitals are full and oxygen supplies are scarce. A tsunami of community support is rising as Thais generously come to the aid of their fellow citizens. But social media and mainstream news are alive with their anger and speculation is rampant about the return of the banished populist former prime minister, Taksin Shinawatra. The only thing keeping the streets empty of protest is the fear of the delta variant, which probably suits the government just fine. But overall, the recent response, garbed in layers of protective measures similar to what I encountered at the airport, appears to be haphazard overcompensation by a government desperate to inoculate itself against its own incompetence. Short of a spontaneous and fearless mass uprising, only a definitive gesture from the notoriously disengaged king is likely to change the political and public health course now. Thailand is waiting for him to show his cards, but I don’t think anyone is holding their breath.