Much is being said about the economy, what is working, what is not and what is mere chimera. Here are a few considerations, general information and personal perspective.

First, the US was already entering recession when COVID came along. As we know, due to COVID, we now have many millions, unlike the EU, entering the final weeks of supplemental income or unemployment insurance. We also have the GOP resisting extending further aid, though when push comes to shove, nearing the election, they may buckle and hand out additional checks. But to whom. They firmly believe such checks are an incentive not to work. And Lord knows, if there’s one thing the gOP wants to squeeze out of you, it’s your labor. They may even agree to mandate rent and/or mortgage relief. But without childcare support, nothing real can happen.

Second, the Bureau of Labor Statistics is releasing misleading reports falsely classifying job losses to make the unemployment rate appear about 3-4% lower than it really is.

Third, existing mortgage and/or rent relief, passed in March as part of the CARES act, is not an open-ended program. Some of this relief will be come to an end soon. Evictions and foreclosures will begin with a trickle and surge toward a flood in a few short months.

Third, as many as 7.5 million small businesses, 25% of the total in the US, employing nearly half of the entire workforce, are at risk of closing permanently if they remain closed for 3-5 months. They will not come back.  Plus, in this environment, the typical half-million small businesses start-ups per month will not appear. Many other jobs will not come back at all. The economy may appear to be opening in some areas. Trump may be desperately gaslighting about how great things are going to be and pounding the table to go out and spend money, but it ain’t happening.

Fifth, state and municipal balance sheets are a mess. Estimates indicate a slow recovery and/or a second wave could wipe out $240B in typical income. The loss of revenue has  been and will be devastating. Unless the economy fully reopens, sales tax revenues will not return to anything close to what they were, and may not return to former levels for years–if then. Property taxes will continue, but not if the base is eroded by foreclosures. Muni bonds are at risk. Pension funds are at risk.

Sixth, many Americans, having had their savings wiped out by unemployment or health expenses, even if the economy opens completely, will be more interested in restoring their own balance sheets than going out and making large purchases. The savings rate will rocket. This will be true whether they lost their jobs or not. The longer the shutdown, the slower the recovery and the greater a shift towards long-term minimalism.

So where exactly will consumer demand be coming from? What will be inspiring consumer confidence?

Seventh, many large national retail chains are in trouble and bankruptcies are accelerating. These are some of the anchor babies of the shopping malls. They are hurting, teetering or already dead. Smaller regional chains and local occupants of the malls will be hurting even more.

Eighth, primary and secondary schools are scheduled to open next month. Trump is attempting to force them open, even though there’s still a good deal of squabbling about how exactly to do that. If the schools don’t open, parents cannot return to work. If there’s no government support for childcare, parents can’t return to work. ICE is attempting to force universities to open with in-person classes by threatening to deport international students if they don’t. If conditions aren’t right for the kids, if there are only limited signs of federal concern with Trump continuing to pound the table for his personal political gain, we will have unprecedented turmoil at the beginning of the school year.

Ninth, during the crash of 2008, the high-risk instrument of choice was the CDO, collateralized debt obligation. These were over $600B in sub-prime mortgages packaged to appear safe, improperly rated, actually high-risk and traded in the derivatives market. When they crashed, they brought the entire system to the brink of collapse. Today, a comparable instrument is the Collateralized Loan Obligation, which is the commercial equivalent of a CDO. There are over $1T in CLO’s out there, most of them sub-prime corporate loans. In this environment of recession, likely prolonged, possibly even depression, many of these loans are going into default.  Both the US Fed and the US Secretary of the Treasury claim these loans cannot bring down the system because the banks aren’t holding them. Everything is OK.

Banks are hiding their exposure by moving these assets off the books. Some (smaller) banks are holding an outrageous percentage of these loans as a portion of capital. When these defaults begin to appear later this summer, they will be cracks in the dam. As we move into the election season, we will see signs of greater damage coming. The Fed cannot fix this. They will need legislation. Based on what happened after 2008, that legislation will be much harder to come by this time around. Any possible legislation will either come via a lame duck congress (unlikely) or after the first of the year. By then it could be too late. Some banks may crash. More damage to Main Street. Capital for consumer and commercial loans (some already heading into default)  will be scarce and expensive.

And, as if all this were not enough, just yesterday, the FDIC (Federal Deposit Insurance Corporation) further relaxed banking regulations to permit banks to speculate even more than they already do by gutting the Volcker Rule (2010), allowing banks once again to own hedge-funds–which will then become vehicles for hiding further distressed loan instruments.

Tenth, corporate earning season will come after September 30. By then it will be impossible to hide the truth. Earnings will be down, perhaps way down except for the market anchors.  The market has been high on laughing gas, propped up by congress and the (now insolvent?) Fed. There may be plenty of companies fat on cash, meaning they might weather the storm, but the market likes forward-looking good news. Where is it?

Into this mix we can throw Russian propaganda, the casual toxic cynicism and arrogance of Mark Zuckerberg, the gullibility of an easily manipulated electorate, the authoritarian agenda of the plutocrats and the deliberate cruelty of the Senate. We will have Trump stoking civil war, attacking his enemies, inciting his base, hyping a vaccine, attacking racial justice initiatives and police reform measures, lying about the economy (and pretty much everything else), suppressing the vote, contriving conditions to declare martial law, and generally dissolving into the desperate machinations of a cornered paranoid malignant (and neurologically challenged) narcissist.

All of these factors combine to generate the Misery Index, a metric produced by the US Intelligence Community. Today it is higher than in 1929. 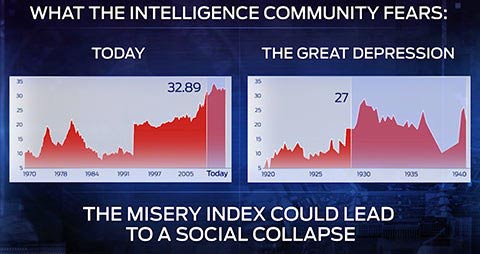 If even half of this stuff plays out, we will be in an unprecedented state of instability, conflict and economic peril—with, frankly, many millions being hungry and all while still dealing (not dealing) with the virus.

Can the NFL save America? Don’t bet on it. Especially since we’ve not complied with the most basic scientific prescriptions to flatten the curve. In that context, perhaps there will be no return to football. But if there’s enough greed among the reactionary cadre of NFL owners and if the fan base is seeking blood (and release), if people choose their favorites the same way they’ve chosen to handle the virus–according to Party–if the intensity on the field reflects the conflict in society, we will surely demonstrate something closer to the gladiatorial spectacles of end-stage Rome.

It will be a fitting and crowning display of sanctioned enhanced “essential” worker abuse without accountability now also pandemic throughout the economy, not at all unlike forcing meat packers to work or subjecting the incarcerated to life without adequate protection.

These economic conditions will prevail into 2021 and could be much worse if Trump decides to legally–and illegally–contest the outcome of the election. Barring mass nonviolent resistance, general strikes, targeted boycotts, bank failures, failing infrastructure (Facebook will still be thriving), the market, i.e. corporate CEOs may be the final bulwark against this monster.

Was it Winston Churchill who said, “America will always do the right thing, just as soon as they’ve exhausted all the alternatives.”?