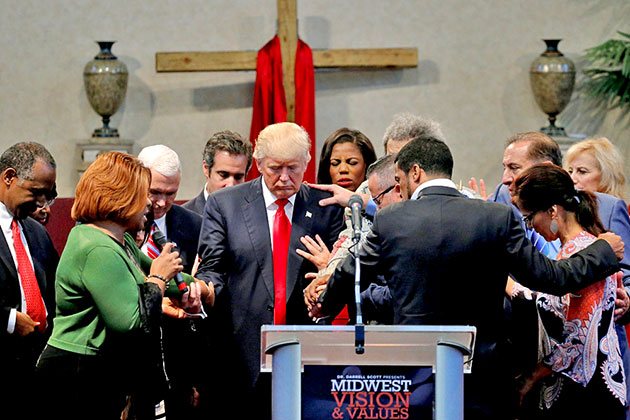 What is it with evangelicals and Trump? He can do no wrong. In fact, the wrong-er he gets, the more they genuflect. Even now, as he turns every press briefing in the midst of a surging pandemic into a campaign rally. Even as he stands by while people die by the hundreds, especially in New York. Why?

Because, of course, he’s a messenger of God.

Let’s take a very cursory tour through religious history, brought to you by someone who is not at all a religious scholar. But bear with me.

Through the earliest period of Christianity, there was a debate. Did Jesus believe everyone and everything is the Light of God? Or did he believe only He is the light of God? The Gnostics believed everyone—everyone—is the Light of God, that divinity dwells within and that the Light can be directly experienced. It cannot be given nor taken away. You’re It already.

If that’s all true, then who needs a church, right?

Constantine became the first Christian Emperor, promoting the faith and merging the Roman Empire with The Church in 325 AD. The State became the Holy Roman Empire and the Church became its spiritual ally and instrument. The first fascist state: the union of corporate spirituality with the institutional power of the state. So began the Holy Reign of Terror of the Church–ruling by fear, torture, extortion, intimidation, disempowerment (and disembowelment), theft and other forms of abuse. There was, in effect, no difference between economic and spiritual subjugation.

The Evangelicals of today want a return to that world: USA = Holy Roman Empire redux.

The first thing the Church did was identify and attack heretics. Calling someone a heretic was the way to consolidate and maintain power by demonizing all opposition and recruiting the flock –energizing the base– to assist in meting out retribution for ideological impurity. Sound familiar?

The original heretics were the Gnostics–the ones who believed that everyone is the Light. They were attacked and erased because they believed the Light of God was in everyone….. or, what might be a modern equivalent, that immigrants are people.

America has always believed itself to be the holiest among nations. But now, the authoritarian structure of Evangelical Christianity has merged perfectly with the pursuit of ideological purity by the Republican Party. Amerikkka on steroids.

Together they root out and demonize heresy wherever it lies. The primary heretics today, just as in ancient times, are the ones who believe the Light of God is in everyone and everything and everyone has equal access to the divinity within.

Today’s heretics, like the Gnostics, are the absolute Devil. Egalitarianism is heresy. Multiculturalism is heresy. International cooperation is heresy. Racial equality is heresy. The USA is now a lawless nation not subject to any restriction other than its own spiritual law—a cloak  gathered upon the opportunistic shoulders of….yeah, you guessed it: Donald Trump.

And for the Evangelicals of today, just like the Holy Roman Empire and the Catholic Church of the First Millennium, money and power are the measure of your spiritual worth. For them, the nation is the body of the Church and thus only the pure, the true believers, may enter (or vote). The President is the Holy Father who is burdened by the Cross of Persecution placed on his shoulders by the devils (Deep State, media) seeking to take down the Church. The ideas of the heretics are everywhere, posing as reason, logic, evidence and the rule of law. Or democracy. Especially democracy.

The work of the Devil is everywhere, making deceit, surveillance, secrecy , cruelty, usury, conspiracy, extra-legal acts and violence legitimate tools of the Church/State. Because those are effective tools against the Devil.

In the eyes of evangelicals, Trump is the Pope of the New Church, seeking Imperial Legitimacy as the voice of God Herself. Oops. That’s another work of the Devil, imagining God as female. Trump’s (unconscious but convenient) design is to disrupt and expose heresy, i.e. the aforementioned belief in law, reason, logic and evidence. Only He, like the Pope, defines what is right for the nation. Only He stands between the nation and Chaos, even as he becomes the primary source of chaos. Only He can protect the body of the Church. Create a crisis, use it to grab more power, wash, rinse, repeat.

Purity is to be defined and established by policy, outlawing heresy in all its many forms. Heretics are hiding in plain sight. They are brown, black and yellow, foreign, non-European, poor, disempowered–and especially uppity females. They are storming the Church. They are ecumenical. They are sad and dangerous fools who think love is love. They worship false gods such as equality, self-determination, intrinsic divinity and the social good. They also believe actual humans lives are worth saving. They are to be rooted out by any means necessary.

The flock is preparing for that day.